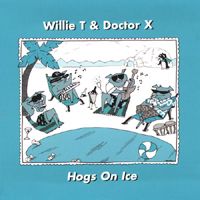 From the recording Hogs On Ice

This is one of our most popular songs on Internet and college radio.  It's been a big hit on FKAP Wizard Radio, in Kosciusco,MS, of all places.  (we are ever so grateful to the Wizard for his enthusiastic review!)  It was very nearly used in the soundtrack to a Cheech & Chong movie, but the deal went sour at some point, and composer Joe Yeno--a good friend from our Connecticut hometown--walked away empty-handed and disgusted with the music business.  Doctor X and I really liked the song, and with Joe's blessing we recorded it on our Hogs on Ice album.  Joe said, "If you make a million dollars, send me some money."  Despite thousands of plays on Internet radio, we've only collected about $23.59 in royalties to date, but we haven't forgotten our promise to Joe!
A cautionary tale about living life a tad too much on the wild side, Pagan Dreams describes a dream about two down and out barflies who, in a chance encounter, find each other in a seedy dive.  They embark on a wild, hedonistic spree involving sex, drugs, and reckless driving. It doesn't end well for them, but the upbeat honky-tonk feel of the song, coupled with Doctor X's witty story-telling lends some comic relief, and it really is a fun song!
The dream ends with the sound of an alarm clock ringing.  Now, no one in the band actually owned an alarm clock, because (as everyone knows) musicians have no need for one.  So we had to find another way to produce the sound. The studio control room was equipped with an old Westinghouse telephone (pre-1984 Ma Bell breakup) with real bell ringers!  This was expertly played by our resourceful recording engineer, Andy Mendelson, who used line 2 to dial the studio's main phone number, which then produced a ring strikingly similar to an alarm clock.  But there were other complications.  We were recording in the wee hours at Baker St. Studios in Watertown, MA (cheaper rates for the graveyard shift). After normal business hours, the studio employed a live answering service to take messages, and it required several takes before we could finally convince the nice lady at the answering service to stop picking up the call!